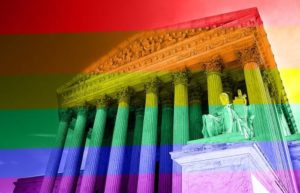 You’ve most likely heard that there is a major, landmark case that could impact the rights of millions in the LGBTQ community but do you know what is actually going on? We break it down for you here in laymen’s terms!

On October 8, 2019, the U.S. Supreme Court heard oral arguments on three separate cases involving the same basic legal issue: whether Title VII of the Civil Rights Act of 1964 protects LGBTQ workers from employment discrimination based on their sexual orientation or transgender status.

In Altitude Express Inc. v. Zarda, Donald Zarda was employed as a skydiving instructor. Since skydiving instructors are strapped to their clients during tandem skydives, instructors often joked with clients about this close physical proximity to ease clients’ fears. While Mr. Zarda worked with a female client, he joked that he was gay in order to prevent any discomfort the client may have had about being strapped to a male instructor. The client reported Mr. Zarda’s comment about his sexual orientation, and he was fired shortly after.

The third case, R.G. & G.R. Harris Funeral Homes Inc. v. Equal Employment Opportunity Commission, was a lawsuit brought by a transgender woman, Aimee Stephens. Aimee was employed as a funeral director, and at the beginning of her employment, she represented herself as male and went by Anthony Stephens. Years later, she disclosed her transgender status to Harris and announced her intention to present herself as female. Two weeks later, Harris fired her because her desire to represent herself as female was “not going to work out.”

Title VII prohibits employment discrimination because of a person’s race, color, national origin, religion, and sex. LGBTQ status is not specifically included in this list, and for those who oppose the expansion of Title VII protection to LGBTQ individuals, this is the main argument for why it should not be added now. Opponents of LGBTQ rights argue that it is up to Congress to change the language of Title VII to include protection for LGBTQ individuals, and that the court system would be overstepping its authority if it were to do so.

However, proponents of expanding Title VII’s protection to LGBTQ individuals argue that discrimination based on a person’s sex includes discrimination on the basis of sexual orientation or transgender status. This is because a person’s sex decides whether discrimination on the basis of sexual orientation or transgender status will occur. For example, if a person is dating a female, they may or may not have a same-sex partner. This question is only answered after learning the person’s sex; if the person is male, he is heterosexual, but if the person is female, she may be homosexual or bisexual. If the employer fires the female employee for dating females but does not fire male employees who date females, then the employer is treating employees differently based on their sex, in violation of Title VII. Justice Elena Kagan proposed an “extremely simple test” in this situation; would the same thing happen to you if you were of the opposite sex?

The same is true for transgender employees. If a person represents themselves as female, this does not answer the question of whether the person is transgender. This question is only answered after learning the sex the person was assigned at birth. If an employer fires a transgender employee for representing themselves as female but does not fire employees assigned the female sex at birth who do the same thing, these employees are also treated differently based on their sex. Justice Kagan’s test also applies here, because a transgender employee would not be fired for living openly as a woman if she had been assigned the female sex at birth.

While both proponents and opponents have advanced many other theories for why Title VII should or should not include protection for LGBTQ individuals, the basic legal issue is whether Title VII’s prohibition on discrimination “because of sex” includes discrimination based on sexual orientation or gender identity.

The Current Divide Among U.S. Courts

The United States is divided on whether Title VII prohibits discrimination based on LGBTQ status. Some courts have not extended any protection to individuals fired based on their LGBTQ status. For example, the lawsuit in Bostock was originally filed in Georgia in the 11th Circuit Court’s jurisdiction encompassing Alabama, Georgia, and Florida. The 11th Circuit has rejected the idea that Title VII prohibits sexual orientation discrimination, so Mr. Bostock’s arguments lost at both the district and 11th Circuit courts.

The U.S. Supreme Court has not yet ruled on these cases, but once it does, the law surrounding discrimination based on LGBTQ status will change dramatically. The U.S. Supreme Court’s ruling will take effect across the country, meaning LGBTQ workers could finally be afforded the basic job protections of Title VII. Stay tuned for updates on the outcomes of these cases and their effects on LGBTQ employee rights.

If you have questions about your rights or think you have been discriminated against on this basis or another basis, please reach out for a free consultation or visit our practice areas page for more information.