Skip to content
Mansell Law Employment Attorneys > Ohio Employment Law Blog > Blog > “Sleeping Her Way to the Top”: How Female Employees May Have a Claim for Sex Discrimination Under Title VII Based on False Rumors About Sleeping With a Supervisor 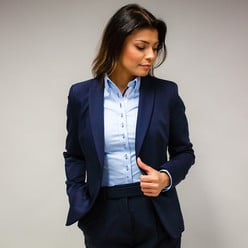 Successful women, especially in male-dominated professions, are well-acquainted with this accusation. It’s humiliating on numerous levels, but perhaps most damaging is the suggestion that the woman didn’t actually earn the position she achieved. Fortunately, the Fourth Circuit Court of Appeals has issued a decision[1] granting women the opportunity to prove the sole reason for their success is due to their hard work and perseverance, and to hold their employers accountable for these harmful views based on sex stereotypes. The Fourth Circuit held that spreading false rumors that a female employee slept with her boss to obtain a promotion can constitute sex discrimination under Title VII of the Civil Rights Act of 1964.

Facts of the Case

Evangeline Parker worked for a consulting company in Virginia, and in under two years, she received a total of six promotions for her exceptional work performance. However, shortly after her sixth promotion, Ms. Parker learned that male employees were circulating false rumors that she had slept with her supervisor, Demarcus Pickett, in order to obtain her promotion. The rumor originated from a co-worker, Donte Jennings, who began working for the company at the same time and in the same role as Ms. Parker. Ms. Parker’s career was more successful than Mr. Jennings’, and her latest promotion meant that Mr. Jennings would report to Ms. Parker. The rumor was motivated by jealousy and animosity towards Ms. Parker due to her success.

However, Ms. Parker’s subordinate employees were not the only ones spreading this rumor. The highest-ranking manager at Ms. Parker’s office, Larry Moppins, also furthered the spread of the rumor, and soon everyone in Ms. Parker’s office was aware of these allegations. As a result, Ms. Parker’s work environment became openly hostile, and her employees treated her “with open resentment and disrespect.”

For example, at a mandatory all-staff meeting, Ms. Parker and Mr. Pickett walked in together. Mr. Pickett was permitted to enter the room, but Mr. Moppins slammed the door in Ms. Parker’s face, locking her out and humiliating her in front of the entire office. She later found out her rumored sexual relationship with Mr. Pickett was openly discussed during the meeting. When Ms. Parker met with Mr. Moppins to address the rumor, Mr. Moppins blamed her for “bringing the situation to the workplace.” He told her that while he once had high hopes for her career, he “could no longer recommend her for promotions or higher-level tasks” due to her rumored conduct and he would not allow her to advance any further in the company. In another meeting, he lost his temper and started yelling at Ms. Parker, telling her he should have fired her once she started “huffing and puffing” about the rumor.

Ms. Parker filed a lawsuit against the company, alleging she was subjected to a hostile work environment based on sex and faced retaliation for making complaints about her work environment. The Virginia district court dismissed both of these complaints, holding that the company’s actions were not based on her sex, and were instead “based on false allegations of conduct.” The court held that anyone can be falsely accused of sleeping with a supervisor, regardless of their sex, and that the rumor wasn’t severe or pervasive enough to produce a hostile work environment. Because of these holdings, the court also dismissed Ms. Parker’s retaliation claim, holding she couldn’t have reasonably believed the rumor was targeting her sex. Ms. Parker appealed the dismissal of both counts to the Fourth Circuit Court of Appeals.

What does Title VII prohibit?

Title VII of the Civil Rights Act of 1964 prohibits discrimination based on certain protected traits, including race, religion, disability, age, and sex. An employer cannot take adverse action against an employee or allow the employee to be harassed because of these traits. To prove a claim for a hostile work environment because of sex under Title VII, the employee must show the workplace harassment was: (1) unwelcome; (2) based on the employee’s sex; (3) sufficiently severe or pervasive, such that it created a hostile work environment; and (4) at least partially permitted to occur because of the employer’s conduct.

The second element of this test was the most disputed in Ms. Parker’s case. Hostile work environment claims arise out of conduct that is “sex-based.” This need not be conduct that is sexual in nature; it can simply be conduct directed at a female employee that would not have occurred if the employee was male. This kind of “sex-based” conduct often occurs due to sex stereotypes that, while often untrue, are still pervasive in our society.

In Ms. Parker’s case, the Fourth Circuit Court reversed the district court’s findings on both counts. It rejected the district court’s logic that anyone can be accused of sleeping with a supervisor and held that rumors about an employee “sleeping their way to the top” specifically target women. These rumors are based on the deep-rooted stereotype that women, not men, must use sex to achieve success. It suggests Ms. Parker “used her womanhood, rather than her merit,” to obtain the promotion.

Moreover, the Fourth Circuit also held that the hostility in Ms. Parker’s work environment was severe and pervasive. The rumor humiliated Ms. Parker by suggesting she did not earn and did not deserve her position in the company. It affected her work performance and the performance of her subordinates, since Ms. Parker struggled to supervise employees who treated her with such blatant disrespect. The Fourth Circuit also reversed the district court’s dismissal of Ms. Parker’s retaliation claim, holding it was more than reasonable for Ms. Parker to believe the rumor targeted her sex. As a result of these holdings, Ms. Parker’s claims will return to the Virginia district court to be litigated, and the court will be instructed to find that sex discrimination claims can be established based on false rumors about a female employee’s sexual relations with a supervisor.

The stereotype that women in positions of power “slept their way to the top” is still disturbingly common today. It indicates that women still face unique challenges at work, and that Title VII’s protection against sex discrimination is still necessary to level the playing field. However, as a result of the Fourth Circuit’s holding, the door has been opened for a successful sex discrimination claim based on false rumors that a female employee slept with her boss to obtain a promotion. Ms. Parker will finally have her day in court to prove she earned her promotions. Stay tuned as we continue to update you on the status of Ms. Parker’s case.

For additional information on other legal claims, visit our frequently asked questions and our practice areas page.