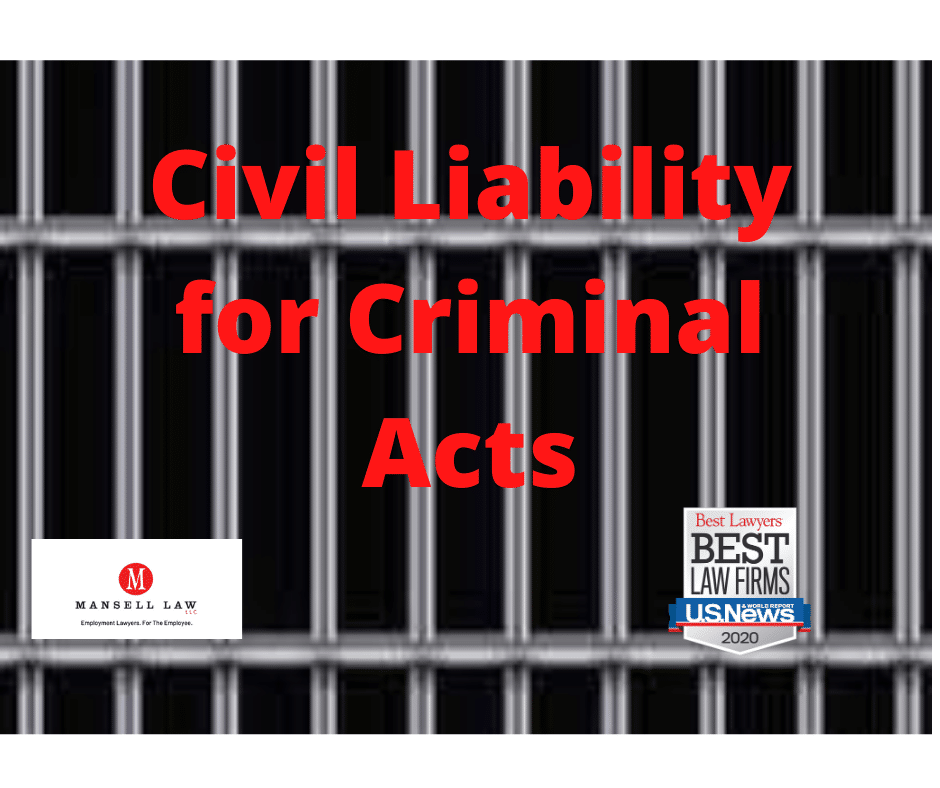 Has your employer or someone you work with committed a criminal act against you? In addition to pursuing criminal charges, you may also be able to pursue civil damages for the offense.

A criminal act can take many forms, such as retaliation, intimidation, extortion, or even physical violence. The Ohio Supreme Court has recently held that you may pursue a civil action for money damages against the perpetrator without having to prove he or she was criminally convicted of the offense.

However, until the Ohio Supreme Court’s recent decision in Buddenberg v. Weisdack et al.,[1] it was unclear whether the perpetrator had to be convicted of the criminal offense in order for the victim to establish his or her claim for civil liability. The Ohio Supreme Court resolved this debate in Buddenberg by holding that a criminal conviction based on the underlying offense is not required.

Rebecca Buddenberg was employed by the Geauga County Health District as a fiscal coordinator. During her employment, Ms. Buddenberg discovered that one of her supervisors had engaged in ethical misconduct, and she reported this behavior to the Geauga County Board of Health. Within 48 hours, her work schedule was changed and became much less favorable. Ms. Buddenberg had previously been granted flexible work hours because she was pursuing a college degree, but her changed scheduled required her to drop out of school. Ms. Buddenberg was told that her hours changed because her supervisor was “mad at her” for reporting his behavior and “wanted to get rid of her.” Ms. Buddenberg’s supervisor also began threatening her and disparaging her character to her co-workers.

When Ms. Buddenberg reported this behavior to the Board, no action was taken and the retaliatory behavior continued. Ms. Buddenberg filed a Charge of Discrimination with the Equal Employment Opportunity Commission, and shortly after, she was issued a Notice of Proposed Disciplinary Action by her supervisor that falsely alleged she violated eight separate workplace policies. She attended a hearing to determine whether she should be disciplined, and after two hours of questioning, Ms. Buddenberg was told she could avoid discipline if she dropped her retaliation claim and accepted a demotion and pay reduction of nearly $1,000.00 per month. The retaliatory behavior towards Ms. Buddenberg continued until she eventually resigned.

Ms. Buddenberg filed a lawsuit against her former employer, alleging, among other things, civil liability under R.C. 2307.60 for violations of three separate criminal statutes for retaliation, intimidation, and interference with civil rights.[3]

Ultimately, Ms. Buddenberg’s argument prevailed. The Ohio Supreme Court held that criminal convictions are not required for plaintiffs to pursue a civil lawsuit against their perpetrators under R.C. 2307.60 based on criminal acts. The Court noted that the word “conviction” is notably absent from the language of the law. Moreover, the Court acknowledged that many crimes are committed that do NOT result in criminal convictions; if someone can be prosecuted for an offense, this does not necessarily mean they will be prosecuted.

The main takeaway from Buddenberg is that employees can pursue civil lawsuits against their employers based on criminal acts without having to prove anyone was convicted of the criminal offense. However, the Ohio Supreme Court has still not addressed whether formal criminal charges need to be brought based on the criminal offense. A court in Franklin County, Ohio has suggested that criminal charges need to at least be initiated before the Ohio civil liability statute becomes applicable.[4] This area of law is continually evolving, and a thorough review of the specific facts and circumstances of your situation is likely required. If you believe your employer or someone you work with has committed a criminal act against you, reach out to us today to schedule a free consultation.