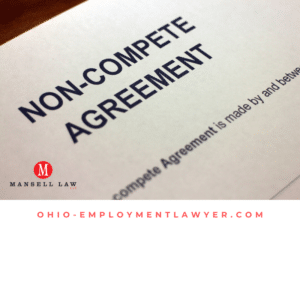 The common belief amongst employees is that non-compete and/or non-solicitation agreements are disfavored and not enforceable.  However, the Courts in Ohio have enforced these restrictive agreements under certain circumstances. Before you assume that your non-compete or non-solicitation agreement is not enforceable, you should read this article and talk to an employment attorney.

When you started your employment, you probably signed a whole bunch of documents and one may have included restrictions on what you can do after your employment ends.  These restrictive contracts are generally referred to as Non-Compete and/or Non-Solicitation Agreements.

After working for your employer for some time, you may be thinking about resigning to pursue other opportunities. Could your non-compete agreement actually effect your ability to work where you want? Are you able to challenge the enforceability of the non-compete and non-solicitation agreement in Ohio?

Challenging the Enforceability of a Non-Compete Agreement

To enforce your non-compete agreement against you in Court, your employer must be able to prove that the restrictions in the agreement: (1) are no greater than necessary to protect its legitimate business interests, (2) do not impose an undue hardship on you as the employee, and (3) are not injurious to the public. The first two elements of this test require the court balance the employee’s interest in being able to earn a living with the employer’s interest in protecting its business. Courts also consider several other factors when evaluating the reasonableness of a non-compete agreement, including: