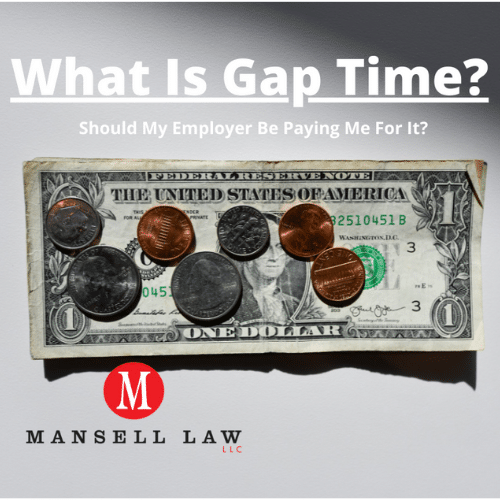 What is Gap Time? Should My Employer Be Paying Me For It?

“Gap time” is a term used to describe the gap between hours paid by an employer and non-overtime hours worked.[1] When an hourly employee is scheduled and works 40 hours in a week, no gap time exists.  Generally, gap time issues arise when an hourly employee works who regularly works less than 40 hours each week performs “off the clock” work for their employer. If you have questions about unpaid wages reach out to Mansell Law, Wage and Hour Lawyers in Columbus, Ohio.

Example: Tom is an hourly employee who regularly works 35 hours per week.  One week his employer asks him to clock out at the end of his regularly scheduled shifts to perform cleaning duties. At the end of the week Tom has worked 35 hours “clocked in” and 5 hours “off the clock.” Tom’s employer does not pay him for any off the clock work he performed. The 5 hours Tom worked without compensation is known as “gap time.”

The Fair Labor Standards Act (“FLSA”) requires employers to pay non-exempt employees at least minimum wage for all hours worked.  The FLSA also requires employers to pay non-exempt employees an overtime premium at one and one-half time their regular rate of pay for hours worked in excess of 40 in a single workweek.[2] Unfortunately, the FLSA does not recognize a cause of action for the recovery of “straight time” in excess of minimum wage.[3] Because gap time hours are not hours for which compensation is due under the FLSA, the FLSA does not require employers to pay employees for gap time work.

Example One: Jane is a non-exempt hourly employee who regularly works 35 hours a week.  Jane’s wage is $20.00 per hour and her paycheck is $700.00 each week.  One week Jane works 40 hours, but her paycheck stays the same—Jane hasn’t been paid for 5 hours of work.  The 5 uncompensated hours Jane worked are “gap time” because she made more than minimum wage for each hour she worked ($700.00 ÷ 40 hours = $17.50 per hour).  Jane didn’t work more than 40 hours, so she isn’t entitled to any overtime under the FLSA.

Example Two: John is a non-exempt hourly employee who regularly works 35 hours a week. John’s wage is $10.00 per hour and his paycheck is $350.00 each week.  One week John works 50 hours, but his paycheck stays the same—John hasn’t been paid for 15 hours of work.  Like Jane, John cannot bring a straight time claim against his employer for the hours he worked between 35–40.  However, John can bring a minimum wage claim against his employer because he made less than minimum wage when his compensation is divided across the total number of hours he worked for the week ($350 ÷ 55 = $7.00 per hour).  John also worked more than 40 hours, which means he has a claim for unpaid overtime as well.

If you regularly work gap time and think your employer may not be properly compensating or if you have other questions about your employment, reach out to us to schedule a free consultation.